There are articles for most expensive cars, jewelries, wig and other ridiculous stuff so why not come up with the a list of the top 5 most expensive sneakers?

We can all agree that when it comes to shoes Cinderella’s glass slippers are the most popular but not only is it fictitious but it is also fragile. Have you ever wondered what’s on the fairy godmother’s head when she wishy-washy waved her wand and came up with that footwear? Knowing she’ll have to leave by midnight, all the running required and what not? We may not have answered that one, but the sneakers on our list is made for a purpose. Nobody would dole out cash for nothing right? Or we might be wrong…

The first on our top 5 most expensive sneakers is the Autographed Nike Air Jordan 1. The shoes is not expensive because of its superb material nor its long-lasting, speed-inducing, could-magically-transform-you-into-Michael Jordan qualities. It’s just a simple sneakers who happens to be autographed by Michael Jordan and was auctioned at Ebay.

Now, somewhere in this world, there’s someone with a serious admiration for his idol. Out of his admiration, he clicked that “bid” button and poof! He paid $60,000 for it! Now, what could $60,000 do? Let’s see… feed the homeless, donate to cancer research, build schools in Africa or change the world by just buying a pair of autographed shoes would do.

2. Nike Air Force One by Prryya & Chinatan’s Couture and Jewelry

Just when you thought that diamonds are girls best friend, we’re proven wrong again. Apparently there are men out there who thinks diamonds are their best friend too. What could the other reasons be for coming up with this sneakers. It landed second on our top 5 most expensive sneakers at $50,000. The sneakers featured gold and 11 carats of
diamond. Are you sure its safe to walk at night wearing it?

What’s up with people and autographed stuff? It landed on our top 5 most expensive sneakers list for its price tag of $30,000. It is a limited edition sneakers. Nike thought that its fun that only 25 people around the world should enjoy it. It was signed by Kobe Bryant and was auctioned off.

Now we’re talking. What do you wear this for? It’s so flashy you could replace your headlights with it. These gold-dipped Nikes was sold at $5,405.

With only 202 pairs in circulation, you can purchase a pair at $3,500. Unless it already sold out, we’ve guessed that it will be revalued at a higher price.

There are rumors out there that Kanye West’s Nike Air Yeezy 2 could retail for $89,100 but we did not include it in our top 5 most expensive sneakers list. Not yet, not until we see the receipt. Sorry Yeezus!

How many triathlon shoes are sold every year? We don’t know but what we do know is that if you plan on competing for the Ironman Triathlon events, you better get a good pair of triathlon shoes. There are a couple of qualifying events happening all over the world and championships are going to be held in Kona, Hawaii, United States and Mont Tremblant, Quebec, Canada. Trainings would be rigorous six months to a year from the said events. Part of the training is getting your gears ready such as the cycles, helmets, sports wears and your shoes. So we round up a list of suggestions for your triathlon shoes.

The list has been tested according to their flexgrooves, arch support, outsole, upper and midsole, and inner.

Puma shoes is one of the products of Puma or Puma SE which is a brand known to be highly involved in supplying sports and athletic goods. The fastest man alive Usain Bolt wore his Puma shoes during his record-breaking run in Olympics both in 2008 and 2012 event.

Puma shoes is one of the world’s leading sports brands, competing against major brands such as Adidas and Nike. The company’s core products are created with being the “Fastest Sports brand in the World” and “Fastest Forever” in mind. Their new tagline was launched this year 2014 to commemorate their 65 years of history making fast product designs for the fastest athletes on the planet. Naming major sporting events such as NASCAR, Formula One, FIFA World Cup as some of the events Puma shoes and brands are highly involved in.

The Puma brand has embarked on the transition from a rebellious alternative that appealed to a niche consumer to a cool, globally relevant Sportslifestyle brand for a broader audience. Just this year, Puma launched it v2 of the Mobium Elite which was first launched Spring of 2013.

Mobium Elite Puma shoes introduces Puma’s latest breakthrough in running shoes. It is a part of the premier models called Adaptive Running collection. Its structure is designed to expand and contract along with the foot’s movement and follows with current trends in performance running shoes. This design encourages the runner to adopt a more natural and efficient mid-foot strike. The definitive element in this design is the Mobium Band. This is the Figure 8-shaped material that runs through the outsole to enhance the foot’s natural spring.

Sources say that Mobium is worth two years of research. It is designed as lightweight training shoes. And the Adaptive Running concept is a plus because it removes the feeling of sloppiness when you lift your foot. Compared to heavier training shoes, the heel cup is shallower. It does not matter though because everything just stays in place when you wear it.

The Mobium Elite v2 has the midsole and outsole remain untouched as compared to the first version. The upper now features a unique mesh material that provides a more secure and comfortable fit.

Mobium Elite Puma shoes for men is available and for women as well. Most reviews say that it is better suited to neutral runners because of its minimal support but besides that, it’s a great shoe. The design is available in a range of colors such as blue, red and green.

Want to buy Puma shoes? Check if your size is available at http://www.womensclothesonline.com/Puma/Sports-Shoes/

Athletic shoes have different types and knowing that will help you get the right one for yourself. Getting shoes is as personal as it could get. It is not a “one size fits all” party.

Most people would only consider shoe size as the only factor in buying shoes only to end up having sore feet after using it for just a couple of hours. The truth is what we use it for and the mold of our feet matters when buying athletic shoes.

There are people who are flat-footed while others have arches that arch more than the others. Most stores offering athletic shoes conduct a simple and short test to determine what shoes a customer needs. It’s so simple its just like a walk in the park because literally, they just make you walk then run.

Determine What Athletic Shoes You Need

Foot that needs neutral athletic shoes are foot that needs no additional support in their footwear through the running “gait” cycle (in biomechanics, the Gait Cycle is when one foot makes contact with the ground, and ends when the same foot makes contact with the ground again). The shoes offer little to no stability to the foot.

Characteristic of neutral shoes is either it has no structure or it offers a small degree of help to the placement of the foot. Neutral shoes are best for people with high arches. Neutral shoes have softer midsoles and are more flexible which could inhibit natural pronation.

Additional support feature are added to the design of stability athletic shoes. The design of the shoes is such to prevent injury and promote good core movement which complements the runners own running style. Stability shoes are for people who are called over pronators. Most flat-footed people are over pronators, they need more support from the shoes as their arches could not provide the support the foot needs during the Gait Cycle.

Other Types of Athletic Shoes

Lightweight athletic shoes are for athletes who needs speed, flexibility and agility. This type of shoes is suitable for competition and faster training on road and tracks. Unlike the neutral and stability shoes, lightweight shoes have less cushioning to keep up with its lightweight specifications.

Minimal shoes or minimalist athletic shoes are low-profile shoes and could be under lightweight shoes. It offers its users a barefoot feel. Although it offers more agility, it is not the usual choice for runners because it offers fewer cushions.

To test your foot’s pronation, you can perform a simple wet test. Wet your foot and step onto any flat surface that allows you to see your footprint. A paper bag or construction paper would do. Check out this article on Pronation and Wet Test.

Check out some Puma Athletic Shoes at http://www.womensclothesonline.com/Puma/Sports-Shoes/ 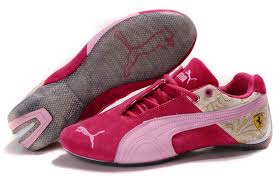 Have you ever wanted to have shoes that provide comfort, agility and a proper fit, all in one great shoe? Have you considered buying durable shoes which keep their shape over time? If yes, then Puma shoes for women are what you require. These shoes are a perfect mix of beauty, sturdiness, flexibility and comfort. Not only that, but there is a massive variety of types and designs that they are available for you to choose from. This is itself makes them stand out from the rest.

Puma is a brand that has established itself in creating shoes which are comfortable, flexible and easy to walk in as well as used for a plethora of purposes from sport to casual wear. The wide range of shoes that are available for jogging, playing, casual sports and regular wear are all custom made to suit the purpose accordingly. Go ahead, pick a pair and rest assured that it would completely suit your requirement.

Puma shoes for women are made from the highest quality materials so as to last a long time. They have a sturdy feel combined with comfort and are made to withstand wear and tear for long. The toughness and the hardy factor does not compromise on the overall functionality and rugged usage of the shoes, hence why they have become so popular amongst the people.

Puma has established a name for itself with years of dedication to high quality products which cater to all needs of their consumers. The trust factor in Puma products is very high due to the excellent products and high standards that are maintained. As a result, the consumers know they are getting a top quality product which match up to the brand image and reliability.

Puma shoes for women are priced on par with other top makers in the market and they give great value for money. This is because of the high brand appeal, superior quality, durability and effectiveness of the shoes. The shoes are available in a wide range of prices, for regular users as well as for premium buyers.

Thus, the points mentioned above should assist you greatly in deciding whether to buy Puma shoes for women. Not only that, Puma happens to be a market leader in terms of critical factors like quality, pricing,  durability and the all-round “cool factor” which affect consumer choices. An awesome balance of all these factors is what makes Puma the #1 choice for a large number of people.

Find some Puma shoes for women on http://www.womensclothesonline.com/Puma/Sports-Shoes/